How To Avoid And Overcome Failures In Academic Writing Tasks 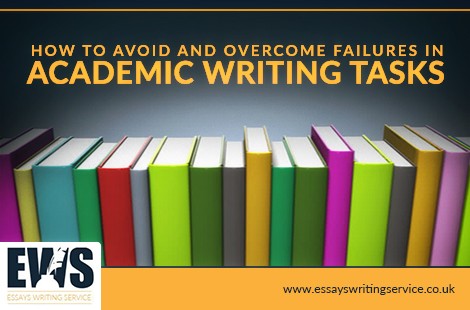 Failure is a reality of life and one should also accept the fact that it is the failure that drives us to be a better individual. Intellectually, all the past and present greats also had colossal experiences of failures but instead of getting distracted, they cashed on it by avoiding and overcoming them to their advantage. With that being said, students should not be worried about the failures, but on the other hand, they should also be prepared to avoid them and combat them while doing their writing tasks. Most of the students let themselves down by giving all the power to failures and let them dictate their way forward when it should be the other way around. So, now we would be discussing that what strategies could be applied to avoid and overcome the failures so they can stop derailing us in our academic quest.

What baffles me the most is the fact that many students live in a world of denial. Their fragile egos make it harder to accept that they have failed. A pro tip to avoid failures and use them to our advantage is to accept the failures as a part of our life. Turn your failures into motivation and you will see how effective a ‘Failure” could actually be. It’s absolutely fine to feel devastated by failures, but make sure that your goal is to accept them and combat them with sheer positivity.

Never Dwell On Your Failures:

Acceptance of failure is another thing while getting obsessed over your failure is an entirely different thing. If you keep nagging over your failures then they will never turn into the motivation, we are talking about. Failures in exams or essays (even after acquiring essay help) are just a normal thing, but if you keep dwelling on them, then they will stop you from moving on and shaping your future in a different way. So, the faster you wave off your failure, the quicker you will be able to leave these depressing thoughts behind.

It is possible that your strategy to get your writing tasks done was flawed, and therefore it became the source of your failure. Now, instead of rectifying and maneuvering the old strategies and plans, you should try to come up with a different strategy or methodology to accomplish your goal. Many students fear going out of the box for their academic tasks but actually, you should be bold enough to take the risk of incorporating a different game plan.

It’s one of the most important phases which many students skip. Many people find ways to avoid confronting themselves after the failure and that’s where failure starts gaining control over your thinking process. Be honest and critical of yourself; tell yourself that you have let yourself down, identify the areas which caused the failure, man up, learn from them and never dare to let them bite you again.

I personally believe that these tips would be pivotal in keeping you on track while avoiding and overcoming the failures. However, if you still think that you might crumble under failures, then Essay Writing Service could be a great source of inspiration and assistance for you.